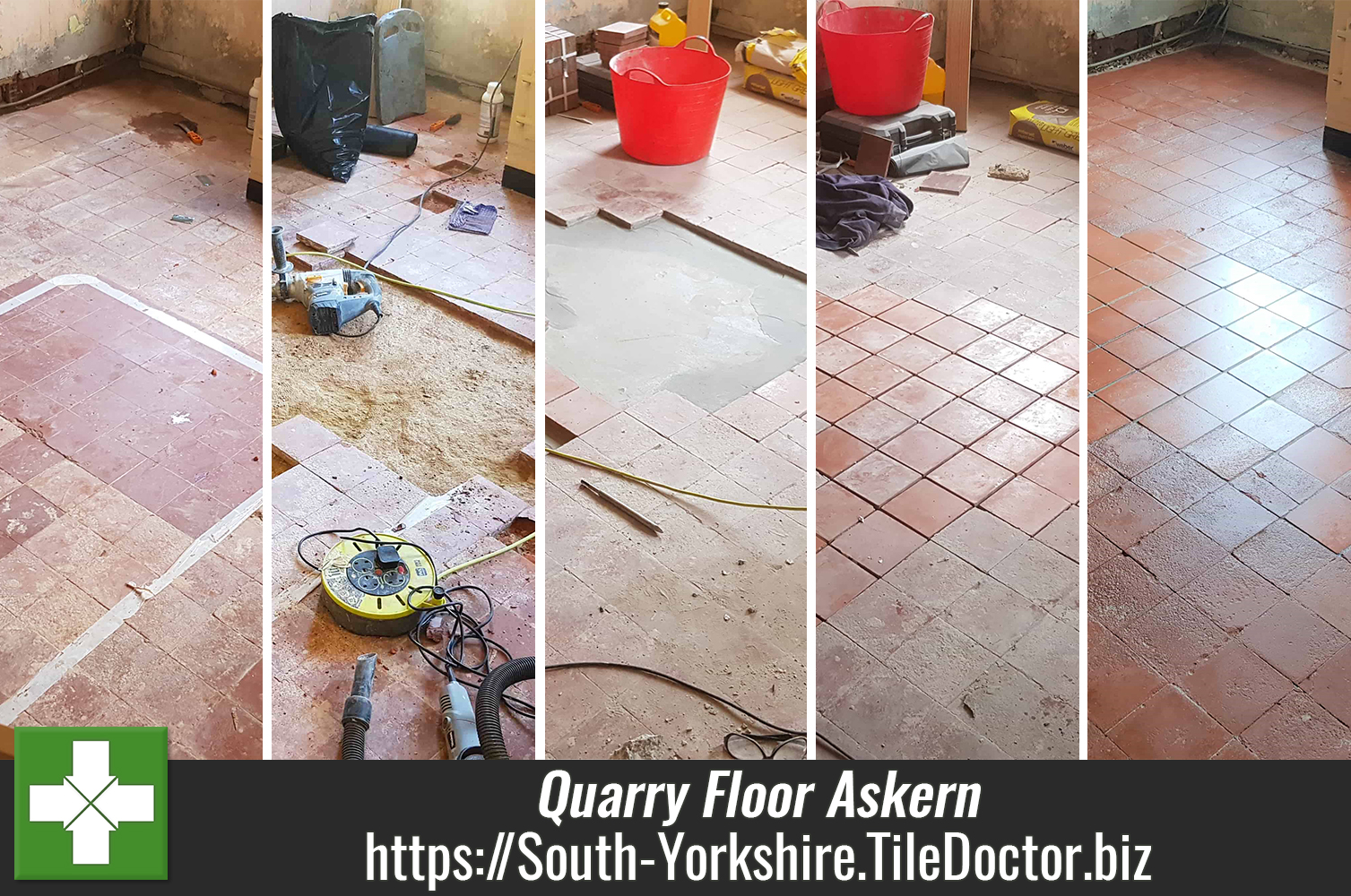 The owner of this house in Askern north of Doncaster was unhappy with the state of its Quarry Tiled Kitchen floor and was contemplating having it ripped up. The house was around 150-years old so this would have been a real shame and after a long conversation I managed to persuade the owner into letting us restore it. Restoring the floor is not only a much cheaper option than having a new floor installed, but it is also much better for the environment. On top of that original features like these original clay Quarry tiles are much sought after and add character to the property which otherwise would have been lost.

A previous owner of this property had taken out some of the old thick clay Quarry tiles and replaced them with some modern Quarry tiles that looked very out of place, they ruined the look of the floor and the current owner wanted them replacing as well as numerous tile which were damaged. In addition, there were two areas where renovations had taken place which had exposed concreted sections of floor which needed to be tiled too. All in all, about 150 tiles were to be installed, fortunately I managed to source a batch of suitable reclaimed tiles which would match well with originals. 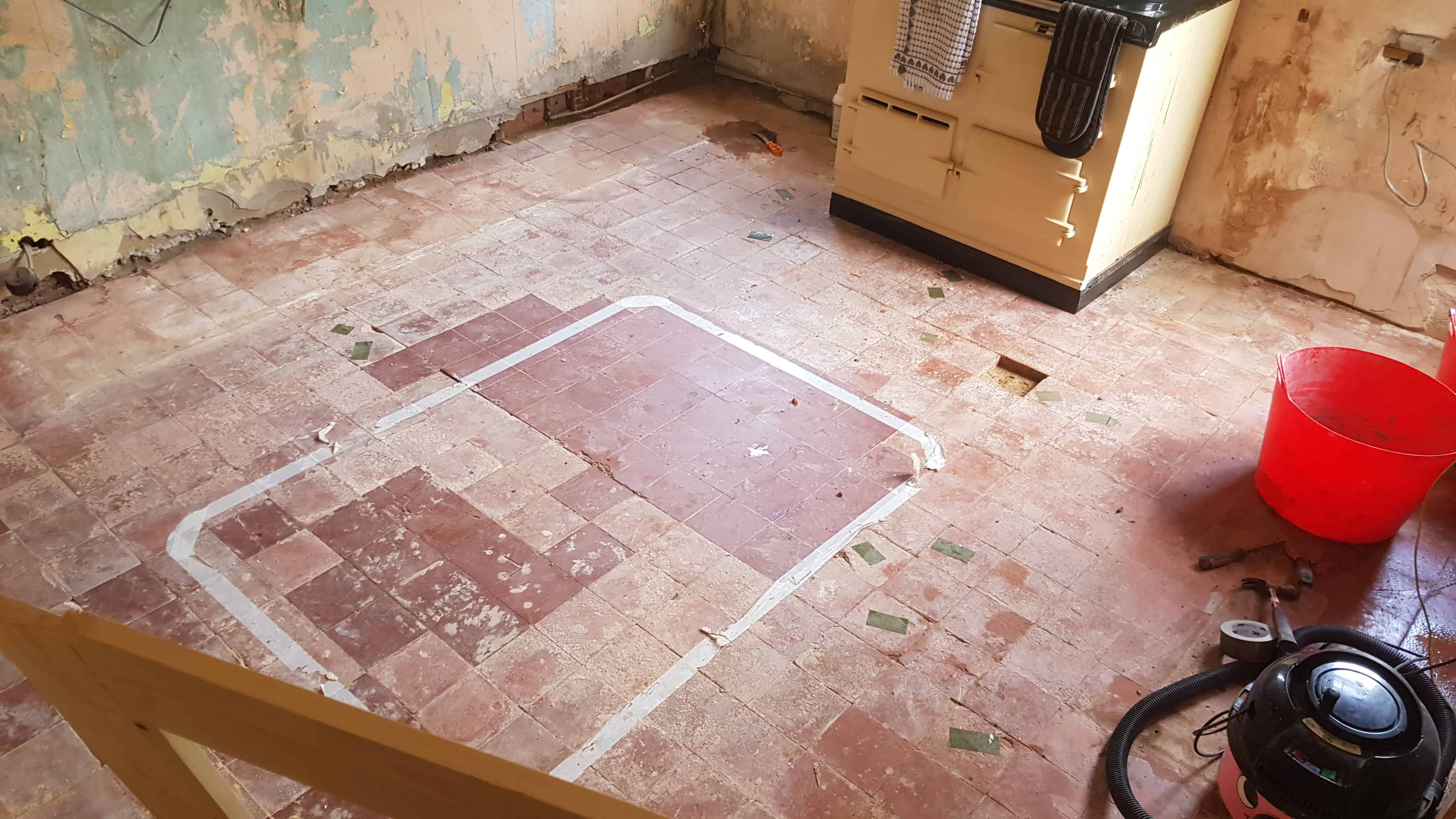 Askern is right on the edge of the Borough of Doncaster and is only a stone’s throw away from the North Yorkshire border. The history of Askern can be traced back to the 14th century. It really started to grow however in the 19th century when this property was built, due to the local mineral water which made it famous as a Spa town.

The restoration began with the removal of the poorly matched red Quarry tiles and the cracked tiles. Another factor I had to contend with here was the difference in the thickness of the more recent tiles compared with that of the original tiles which were much thicker. 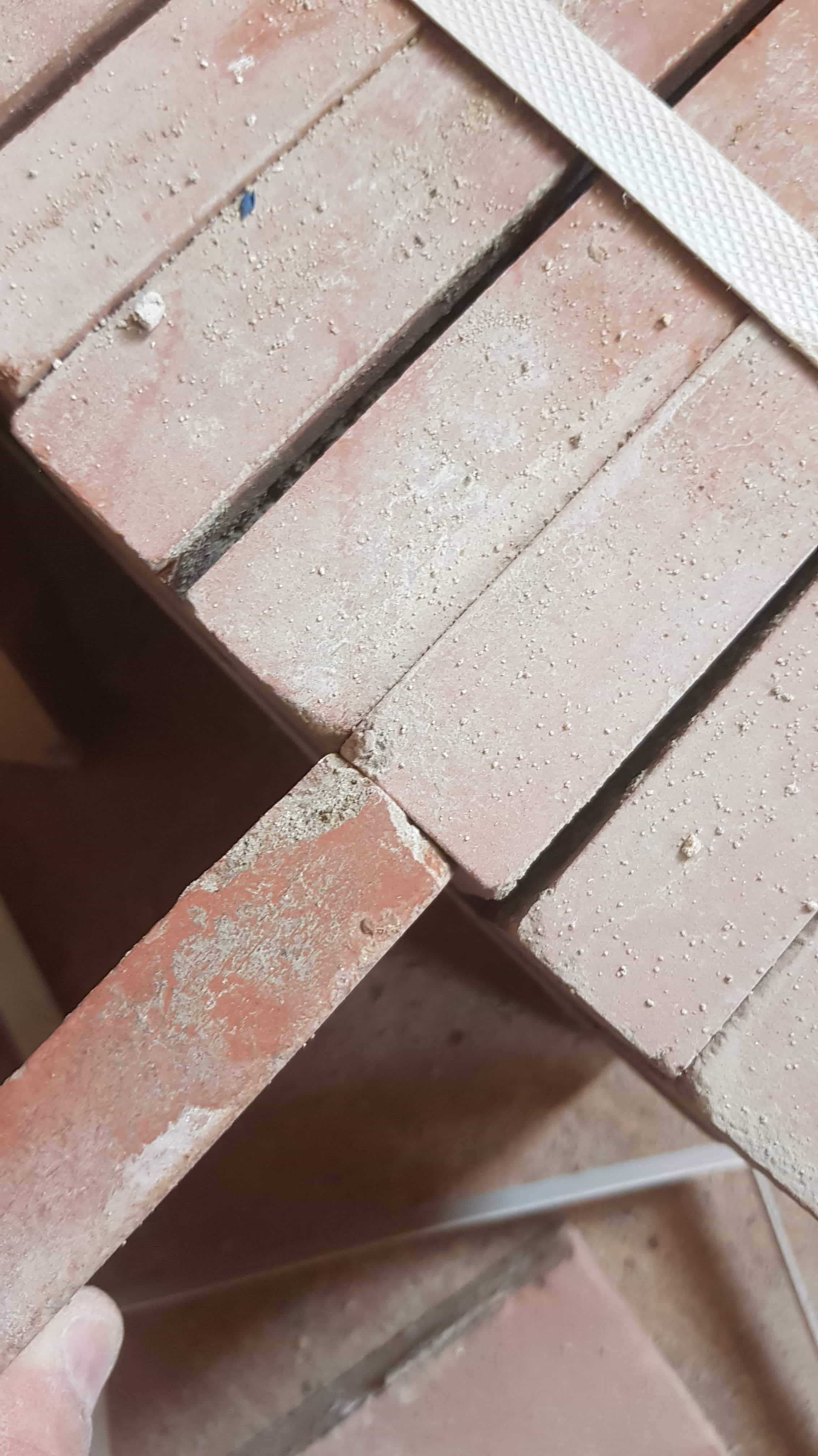 The concreted areas were also carefully dug out so they would be deep enough for a new level subfloor to be poured giving the replacement tiles a good bed to lay on.

As I mentioned earlier there were roughly 150 tiles in different parts of the Kitchen to be installed, grouted, and finally left to set so it took some time to complete. 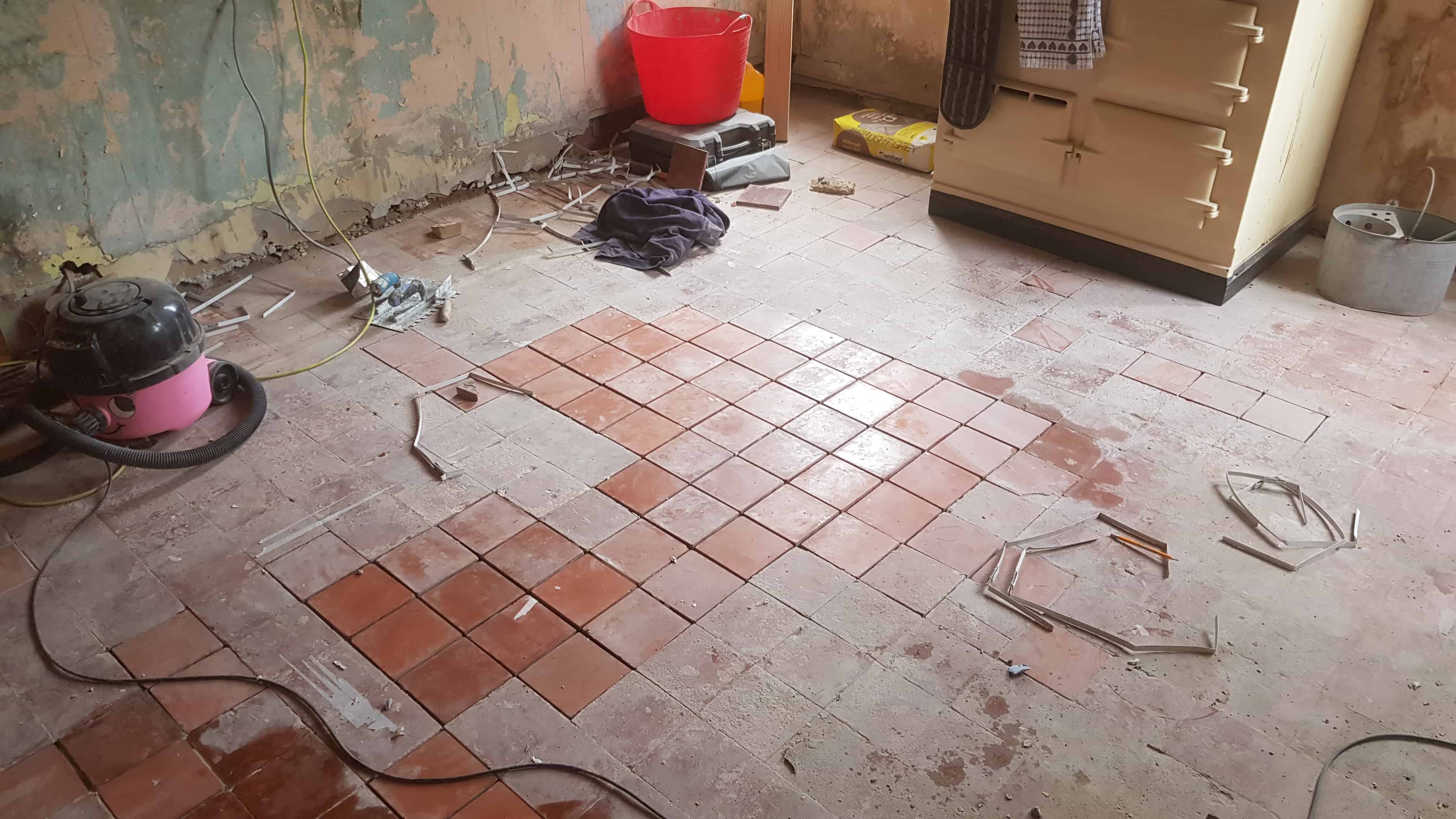 We returned a few days later to start cleaning the floor. My process for this was to apply a strong dilution of Tile Doctor Pro-Clean to the floor and then leave it to soak in for about ten minutes. Then I followed up by scrubbing the floor with a rotary floor buffer fitted with a black stripping pad.

After scrubbing each tile several times, the slurry generated was rinsed off with water and then extracted with an industrial wet vacuum. For the more stubborn areas this process was repeated until I was satisfied the floor was as clean as it could be and that all the decades of muck and grime stuck to the old tiles had been removed.

Once I was happy with the floor it was left to dry over a week, this is important as clay tiles can take a long time to dry and the floor needed to be bone dry to achieve the best results when sealing. When I eventually returned six coats of Tile Doctor Seal & Go Extra were applied to the floor giving the floor a beautifully satin look and protecting the floor for years to come. 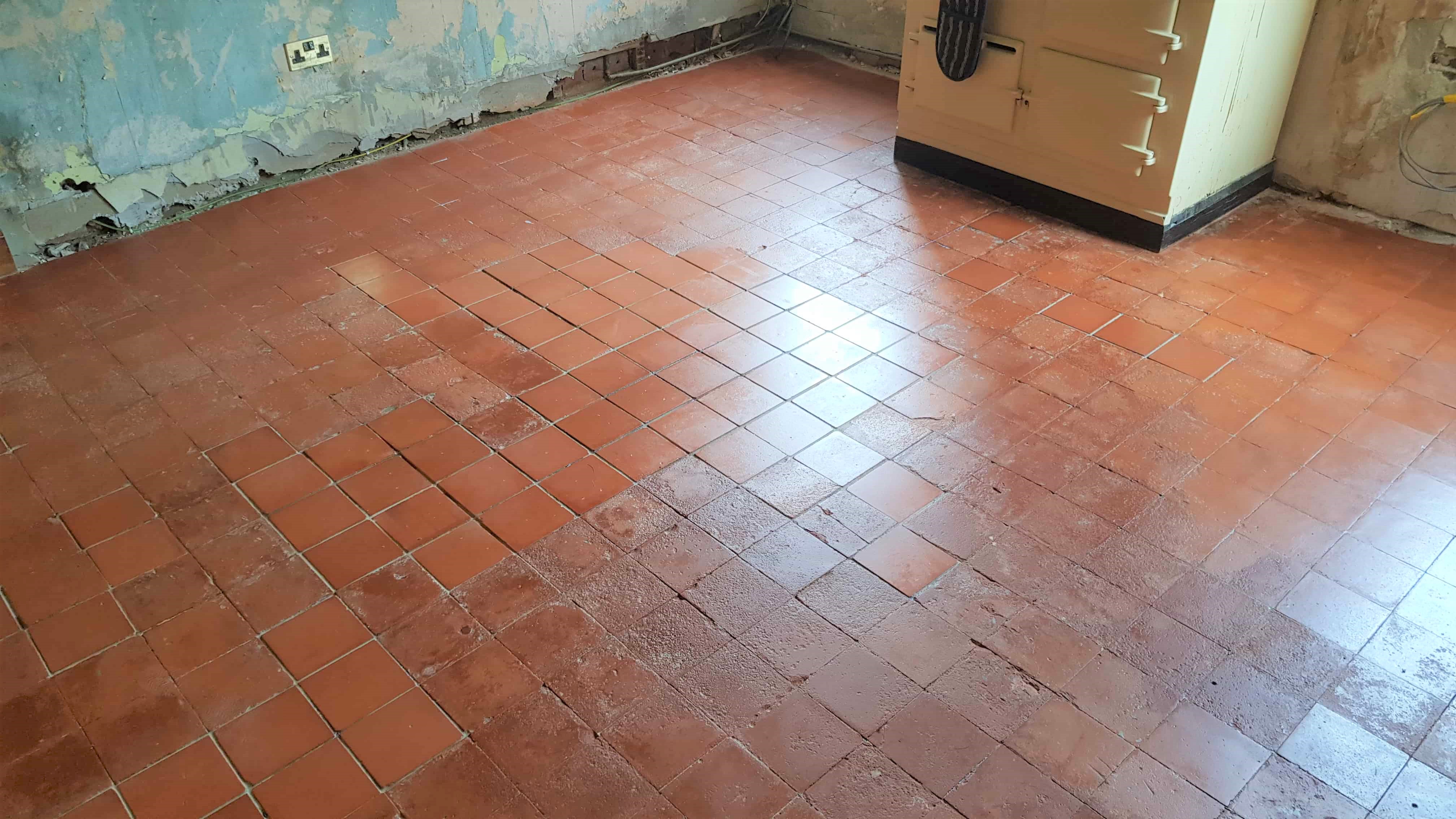 The client was very happy with the work we had carried out and is looking forward to continuing the renovation of the property including the installation of a new kitchen. For after care I recommended Tile Doctor Neutral Tile Cleaner. This is an effective cleaner that has a neutral pH formula that will not prematurely erode the newly applied sealer like many stronger supermarket products.