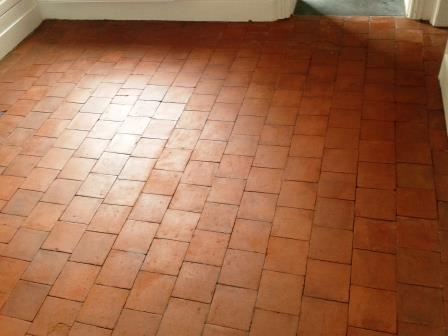 Details below of a Victorian Quarry tiled floor belonging to a customer in Oswestry who had recently moved back to the area and wanted to restore the original features of the house including the Quarry tiles floor which had several coats of red floor paint and was later was covered with carpet for a number of years. The customer described the floor as:

“I have 2 areas of quarry tiles that need a serious make over, in the hall and the back room. There are patches of red paint and areas of mineral deposit and lots of ingrained filth!””

I managed to clean the floor with a strong dilution of Tile Doctor Remove and Go which was left to soak into the tiles for a while before being scrubbed in using a rotary machine fitted with a black pad; the resultant slurry was washed away using more water and a wet vacuum. The whole process was repeated several times as the paint was really stubborn and in places I had to remove the paint removal with a scraper. Once I was happy with the condition it was given a final rinse to remove any cleaning products and then left to dry for five days leaving an air mover with the customer to accelerate drying.

The tiles have to be dry before sealing and even though I returned five days later the damp meter still indicated that there was moisture in the tiles which I suspect was due to there being no membrane in place under the old Victorian tiles. I agreed with the customer to come back a further week later which proved sufficient and the floor was dry enough to take the sealer.

The customer wanted a matt finish so I sealed the floor with two coats of Tile Doctor Colour Grow which is an impregnating sealer that occupies the pores in the tile and also enhances the colour of the tile.

The customer was out when I applied the sealer but when the she got home she sent me the following message:

“The floor looks brilliant. So much better than I had ever hoped. Thank you.”


Source: Tile, Stone and Grout Cleaning and Sealing in Surrey